The Dodgers have a long history of having some pretty familiar ballpark foods. They don’t get quite as wild as some of the other teams around the league, but the classics are always on the menu at the Ravine.

This year, the Dodgers are going a little off of the beaten path. The LA Times revealed that the team is debuting a new menu item this year that is sure to have fans lining up to purchase from the concession stands.

The new item in question combines two fan-favorites: micheladas and hot dogs. Dodgers fans will be able to buy this one-of-a-kind Michelada Sausage during their trip to the ballpark in the 2021 season. 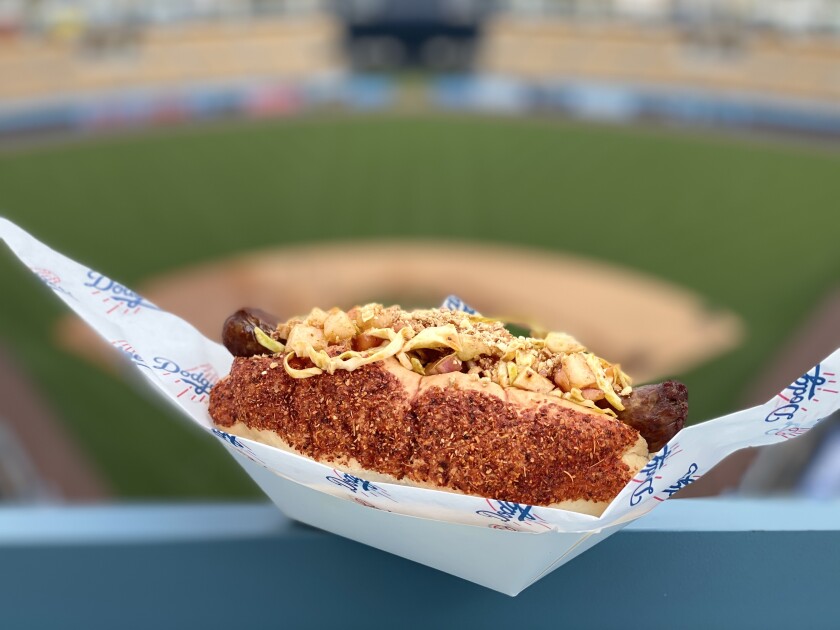 The michelada sausage combines michelada spiced sausage with citrus coleslaw and Tajin seasoning with a chamoy nut crumble. We would suggest those on the keto diet steer clear of this one. But Dodgers fans who enjoy a nice michey with their dog are going to be very happy.

Dodgers fans who got to watch Walker Buehler’s start this week might have thought he was feeling great. But Walker later said that his velocity was not quite where he wanted it to be. The right-handed hurler was sitting in the mid-90s, but he can certainly touch higher than that.

Dave Roberts had Dodgers fans in a little bit of a tizzy on Sunday afternoon. Doc decided to rest Corey Seager and Cody Bellinger as part of the plan to get guys off of their feet in a long season With Corey on fire at the plate, fans were a little upset.

Brook is the Senior Editor of Dodgers Nation, with several years of experience in sports journalism. He is an avid Dodgers and Lakers fan, and can be spotted fairly often at Dodger Stadium and Staples Center.

Markus Lynn Betts! 😱😱😱😱
Ohhhmaaaagawwwwdddd.
Anyone pee a lil in their pants after that?! No? Me either 🙄

Kersh being the 🐐 he is went 6 giving up only 2 hits, 2 walks, and fanning 8! 🔥 BEAST. PS... Pofar is now on the same level as the cheatin' Asstros. Fight me. Willie Nelson got outta a jam and Blake did his duties and sat em down! Vic gets the close and ohhhh what a walk-off close! 🤯

Bats were pretty silent to say the least, but I mean it was Darvish sooo. A pitchers duel indeed. Luckily our fearless leader knows pitches and got that crucial walk to get a run in. And of course JT with that one-handed finger 🖕, I mean dinger (😏) for insurance.

Sooo let's get the 🧹🧹🧹 for tomorrow yeah? It's that man Bauer going against the limited innings man Snell. Game time 1pm!

For those who were curious about what happened with Profars cheating... Here it is. He clearly swung late and hit Barnes glove ruling it an "interference" allowing him to take 1st even after he struck out. Bullshit swing indeed Kersh.

On the next episode of "Cheaters", @profarjurickson has some explaining to do...

We see that you have a Adblock Detector Enabled!

Dodgers Nation is a small business founded and run by Dodger fans born in Los Angeles. The ads on the site are the primary source of income for our team and we would appreciate if you could whitelist our site in your adblocker, so that we can continue managing this amazing community! Thanks so much for the consideration. Go Dodgers!

How to disable? Refresh